Home » What I ate in the Bay Area

As you saw from my earlier post, I was in San Francisco last week. While I was there, I of course tried to enjoy some good food and drinks! Whenever I travel I always like to eat at places that aren’t available back home, and also try some local beers I can’t find in Texas. 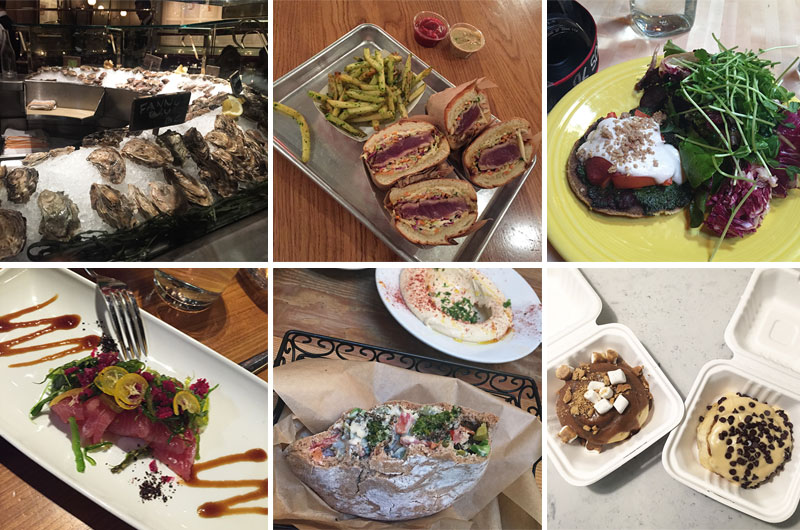 Sunday: For dinner that first night in San Francisco, we went to eat at a Venezuelan restaurant that I had seen on The Food Network channel, called Pica Pica. They cater to the San Francisco, gluten free crowd, so their menu is more of a California take on Venezuelan food. This place unfortunately didn’t do it for me, or the 3 others that I went to eat with. Their signature plate, the arepa, was pretty burnt on the outside and difficult to bite so I had to scoop out the insides and eat it with a fork. The chicken did have good flavor though, and they had a green sauce that was pretty good.

After dinner, we made our way to Smuggler’s Cove for some rum based drinks that make you feel like you are in the Caribbean. I can’t remember what the two drinks I had were called, but they were both pretty good. They have a pretty big menu so it’s easy to find something you’ll like. The place is built like a pirate’s ship, and I believe has two levels. I spent my time mostly at the lower level.

Monday: The food highlight of the day was definitely in Napa. The first stop after the champagne tasting at the Mumm Napa winery was at Bouchon (top left) in Yountville. We sat at the bar and ordered a dozen oysters from both the east coast, and west coast. Both coasts were delicious, but I think I preferred the East coast oysters a bit more. At Bouchon, we also had to order the truffle fries… These fries are $18 but they are so worth it!

After that, we went to downtown Napa for some Ahi Tuna burgers at Gott’s (top middle). They have a location in San Francisco, but since the first time we tried it was in Napa, we thought we would make it a Napa thing. Definitely check it out ft you are in the San Francisco area, and get the Ahi Tuna burger!

Tuesday: While in Palo Alto, we went to a place called Oren’s Hummus (bottom middle) for lunch. I love hummus, so the name got my attention. It’s authentic Israeli food and they actually get a lot of their ingredients flown in from Israel. I had the falafel sandwich, which was really good and an Israeli beer.

Wednesday: With all the vegetarian and vegan restaurants available in the area, I thought I would try some out. For lunch, I found a place called Judahlicious where I had a pita filled with veggies, pineapple, and topped with cashew sauce. There were a few other items I saw that looked pretty good too, so I would definitely try this place again.

For dinner, we went to Bocanova (bottom left) over in Jack London Square in Oakland. I had some Ahi Tuna, grilled octopus, and a delicious warm chocolate croissant bread pudding that was topped with an even more delicious Mexican chocolate ice cream! For drinks we then made our way over to Beer Revolution which had a huge selection of local brews.

Thursday: Once again I tried a vegan restaurant, this time over in Berkley – Cafe Graditude (top right). I ordered what they call a pizza, which was just a live wheat bun topped with pesto, sun dried tomatoes, olives, and cashew sauce. The side salad was good, but tasted a little salty. Since I was in the area, I stopped by Cinnaholic (bottom right) for some super delicious vegan cinnamon rolls! I found out they are opening one in the Dallas area so I can’t wait for that.

Dinner was had at a Sushi restaurant in Alameda, which had some really good sashimi. The rolls were also good, as was the sake (don’t remember the name). Then for drinks we headed back into the city to one of my favorite bars: Bourbon and Branch. It’s a 1920’s era speakeasy style bar and the cocktails are amazing. You do need reservations, and they give you a password to say when you knock on the door… just like during the prohibition era.

All in all, I would have to say my Bay Area food experience was pretty good. No place really disappointed, except for the first night’s restaurant. I also really liked how much easier it is to be vegan there with so many restaurant options.